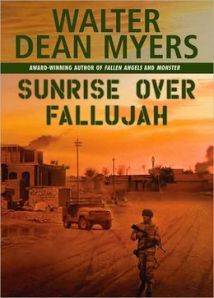 In Sunrise Over Fallujah, Walter Dean Myers’s provides a thought-provoking fictionalized account of a young American soldier involved in the US invasion of Iraq in 2003. Throughout the novel, Myers offers readers a window into the realities of what it takes to fight a war, and also the complexities of how to win peace in the modern world.

Myers’s protagonist Robin Perry, called Birdy by the members of the Civilian Affairs unit he fights along side, comments on everything he witnesses, from military food, the oppressive Iraqi heat, how the American Press reports the war, to the contribution women soldiers make to the effort. Through it all he speaks with acuity and honesty. Even as he repeats the US Military’s “official” line by putting the polemics and policies in the mouths of officers and politicians, the reader never feels burdened with Myers’s editorial. While the messages Birdy receives from Higher-Ups are often contradictory and confusing, Myers’s sticks to Birdy’s point of view, and thereby keeps the story emotionally and politically truthful, as well as relevant to young people struggling to understand war in general and the Iraqi war in particular.

Throughout it all, Birdy’s voice sounds genuinely like a young American from the inner city struggling to understand a complex reality.

Birdy, and the other soldiers Myers depicts are at once proud, confused, and scared, while also looking for ways to connect with the Iraqis and the women and children who suffer alongside them, and his dying and wounded comrades. That Myers manages to portray this complex situation without drowning the reader in grief or commentary, is commendable.

Violence — VV – The discussions of wounds and the battle scenes are truthfully drawn but never gory or excessive.

Sex – S –there is some overt sexual discussion, and an attempted rape, but nothing is depicted in detail.

Questionable practices — ? Some discussion of drug and alcohol use.