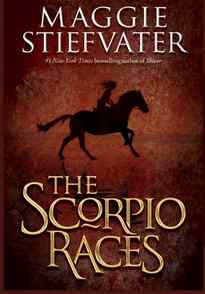 With a steady hand and lyrical voice, Maggie Stiefvater retells the legend of the capail uisce, the famed water horses of the North Sea Islands. But Stiefvater’s novel is no mere retelling. Told from the perspective of two riders, Sean Kendrick and Puck Connolly, the story centers as much on the love between a horse and its rider, as between the riders themselves. Both orphaned by the very race the two set their sights on winning, Puck and Sean narrate, offering details of race lore and island culture. Through these two pitch-perfect voices, the reader can taste the sea and feel its spray on one’s face.

Sean, master horse trainer, has won the race four years in a row, but in order to gain his freedom from a tyrannical boss and his jealous son, “Mutt” Malvern, Sean must win the race one more time. Only with the winnings from the race can he afford to purchase Corr, the water horse he has trained and nurtured since his father’s death in the race nine years earlier. Mutt’s rage at his father’s preference for Sean leads him to despicable acts that threaten not only Sean’s chances at victory, but his life and his horse, as well.

Orphaned, as well by the races, Puck, too must win the race, in a desperate attempt to save what is left of her family. But no woman has ever dared race before, and the efforts to keep her off the beach the morning of the race begin long before race day. In a tentative alliance Puck and Sean help one another, and their shared love of the horses they will ride binds them together with a single purpose. But only one of them can win the race and the prize money.

Stiefvater’s story, in her signature combination of fantasy and reality grounded on rock solid details of setting and character, tells of courage, grit, determination, and love.

Highly recommended. Grades 6 and up.